Readers Write: ‘I have never ridden my bicycle so hard or for so long’ 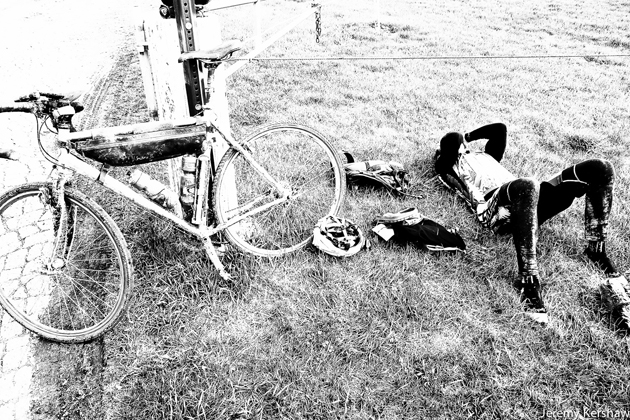 Editor’s note: Riders Write is an occasional column where we feature reader-submitted stories. This edition tells the story of the Trans-Iowa, a 330-mile gravel race that traverses some of the most difficult terrain imaginable. Author Jeremy Kershaw knows his gravel, too. He is the creator and director of the Heck of the North, a similar event in Minnesota.

Jay Barre and I looked back 100 yards at the figure of Bill Graves hunched over his bike. He waves us on. His front rack had broken. Jay and I spoke almost incoherently about what we should do. We had to go. We had another 50 miles to go. Time was all of a sudden a very valuable commodity. Our hearts sank leaving a very strong rider on the side of the road. We both hoped that he would just kick the damn thing off his bike and keep going. Just keep riding damnit!

Twenty miles to go. Eighty. 130 miles to go still. It just never seemed to end. The last 60 miles were without a doubt the most difficult miles of my life. Jay kept crunching the numbers and we had no time to waste. But the roads just went from bad to worse. Yes, we all “love to ride gravel” and all that, but fresh limestone (golf to tennis ball size rock) with no packed track made us almost sick to our stomachs. And the hills just kept coming. One after another.

There were so many times that we just asked, “how do my legs keep going?!” Ironically, our legs felt OK. But hands, lower backs, and butts were all just wasted. Jay didn’t want to look down south any more in fear of what he might see. I was chafed for sure, but what concerned me the most was just the pure soreness, the pain of trauma on my inner butt cheeks. It felt better to stand and pedal. I worried I had ulcers forming. I worried I would turn into one of my patients that you have to turn every two hours. I shut out the thought and took two more IBU’s.

I had a second of doubt trying to follow Jay’s wheel toward the end. He was a pure motor. I mean he just didn’t seem to falter. Youth? Maybe. Natural toughness. Yes. Somewhere I found another store of energy. How? How does the body keep going? This is what I came for at Trans Iowa. This is the marrow of these endurance events. I needed another pure dose of this insanity. Another swim in the deep end. I put my head down and passed Jay so that I could take another pull at the front. He had done a lion’s share of the work this morning. But I scraped together a few more watts and broke the relentless headwind for him. At least for a couple of minutes.

Up ahead, we saw riders that had let us go earlier in the day. All were strong, great gravel cyclists. Good guys. But I stood and attacked and wanted them behind us. We slowly bridged to the five and just kept riding. I seriously felt like Jay and I was riding to the storied velodrome in Roubaix, France. Overcast, windy, rain threatening. Bodies absolutely hammered. For only maybe the second time in my cycling life, I found a reserve of energy that allowed me to go faster than I thought I could. It was a highlight of the race. Not passing those guys. But just feeling that strong when it mattered most.

I usually pride myself in my navigational skills. I love to lead and I swore that I would follow my cue cards religiously. I always do. I have done many solo nights successfully. But the sleep monsters were particularly mean this race. I don’t know how many times I looked down at my cue sheet only to go blurry-eyed and feign some knowledge of our current whereabouts. I was lucky to be with a savvy and generous bunch of guys through the dark times of the T.I. I don’t think they missed a beat all night. So impressive.

And never will I go with such a miserable lighting system again. It was anemic at best. But again, lucky to be with guys who had enough combined luminous to do major surgery by. Thank you gentleman for your firepower, both brain, and headlamp.

There must have been a legislative mandate to make all farm dogs in Iowa under 20 pounds. I have never been chased by so many Yorkies, Korgies, and other yippers. Where were the big, mean old guys of yore? In their place were the new Mig fighter planes. By the time you saw them, it was too late. So much yipping. So many ankle-biters.

And no, this is not RAGBRAI. We were not just riding out in the ditch. We are not lost, which is what must we look like to any rational Iowa rural resident.

Three AM. Raining hard and windy. A farmer hears their dog barking and happens to look out his window. A string of guys riding their damn bikes on a dirt road in the middle of the night. All wearing headlamps. Damn fools. The same pack of guys shows up at the convenience store is absolutely the darkest part of the night. The guy at the register stands there with a dumbfounded look. Headlamps still on. Click-clack and muddied cycling shoes slipping on the polished floor. Dumbly and I mean dumbly looking for something salty to eat. How hard is it to pick out something to eat after 230 miles? Really hard. The guy at register must think we are insane. But a curious question? Not one. Not one comment from the register guy.

I slump down on the floor by the cash machine and numbly eat a very white-looking ham and cheese sandwich. I spill Chex Mix on the floor and sweep it up with my muddy, gloved fingers. I feel like a homeless guy at a Grey Hound station. Someone says we gotta roll. I say something like “thanks” to the guy at the register. Not a peep. We saddle up and head back into the darkness.

I feel pretty good. It’s dark but I know it will be getting light soon. I’ve lucked out and hooked onto a group of guys riding the pace I want to go. We are making miles into the headwind. I think I have a good chance of actually making the first checkpoint this year. I know I’m not going to give up this year. I hear the first robins chirping their morning song. The kildeer are barking their usual orders as they glide by right in front of our bikes. I love riding these rural roads.

I have never ridden my bicycle so hard or for so long.

Jay and I ride down the paved block to the park and finish line. It is just how I imagine it. Farrow is there. So are Ari and Giggles. We stop riding after 33 hours and 330 miles. Someone takes our bikes. I hug Jay. Guitar Ted and others congratulate us. I sit down and feel absolute and total relief. Someone gives me a Budweiser and it is the best beer I have ever tasted.

It is finally over.

I can finally stop pedaling.